Concerned About Football, Soccer or Other Head-Related Sports Injuries? 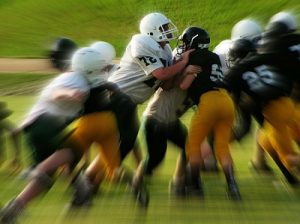 The excitement of this most American game of modern gladiators battling over territory cannot be denied. Football must touch an ancient part of our psychology and that is why it draws in millions of people around the globe. Football widows would enthusiastically agree.
However, football, along with so many other sports and human activities, has a dark side: you can get hurt. Badly hurt. We’re not just talking about broken bones. It appears that football (and boxing) causes brain damage known as CTE – chronic traumatic encephalopathy associated with repetitive head trauma. Other injuries include rotator cuff tears, whiplash type injuries and a host of other sports injuries.
The problem is worse than we thought. In a recent study published in the Journal of the American Medical Association, CTE was diagnosed on autopsy (post-mortem) in a high proportion of former football players whose brains were donated for research. The study found that 110 of 111 National Football League (NFL) players had brain damage, That’s over 99%! Researchers also found brain injury to a lesser degree in non-professional players. For example, CTE was found in 3 of the 14 high school players (21%) studied but 48 of 53 college players (91%) and 9 of 14 semiprofessional players (64%).

Chiropractic may be able to offer relief!

After the article was published, McMahon began receiving chiropractic treatments that he feels improved his short term memory and largely eliminated his headaches. “The first time he (the chiropractic doctor) did it, my head was so full of stuff it literally felt like the toilet flushing,” McMahon said. “I could actually feel the stuff draining out of my head.” McMahon had daily chiropractic adjustments for a week and now returns for an adjustment every 3 months.

Want to learn more about the potential benefits of chiropractic treatments?