About one in 12 people in the United States now has asthma, a total of 24.6 million people, and an increase of 4.3 million since 2001…. The increases come, surprisingly, despite improved air quality throughout most of the country and widespread decreases in smoking.

During an asthmatic “attack” the little tubes that transport the air in your lungs (bronchioles) become swollen, go into spasm and fill with mucous. Asthmatics 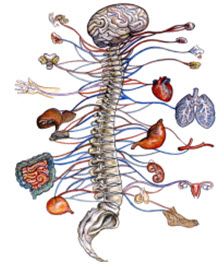 struggle for every breath, literally gasping and wheezing for life during an attack. In some unfortunate individuals the wheezing, gasping and struggling go on continuously and long-time sufferers may develop a barrel chest. Attacks may be triggered by allergic reactions, emotional stress, physical exertion or irritants like cigarette smoke. The most dangerous form of asthma, status asthmaticus, is so severe it can result in death.

Asthma was almost never a fatal disease; medical folk-wisdom used to hold that no child ever died of asthma, but now asthma kills over 5,000 a year. It is the most common chronic condition in children.

Medicine offers no cure for asthma. Patients are told to avoid physical or emotional irritants and are given temporary relief with cortisone, inhaled corticosteroids or bronchodilators that prevent or reduce swelling inside the bronchi. These drugs may cause severe side effects including addiction.

Is a lifetime of drugs the only answer?

Chiropractic is not a treatment or therapy for asthma and yet for over a hundred years asthma and sufferers of all types of respiratory conditions have sung the praises of chiropractic care. (2)

Typical among case histories is that of an 8-year-old diagnosed with asthma at age five who was using Beclovent™ and Albyterol™ 1-3 times per day. After eight chiropractic adjustments over a period of 2½ weeks, the child had stopped inhaler use, wheezing had ceased, he could run without gasping and was free of asthmatic attacks without medication.

Anyone with asthma, bronchitis, emphysema or other chronic lung conditions needs to ensure their lungs and bronchi are receiving uninterrupted nerve communication from their spines. Chiropractic is a healing art dedicated to keeping the nerve passages between the lungs, bronchi and other structures of the respiratory system open and unobstructed, thus permitting them to heal and to function at their utmost.

If you know someone who suffers from asthma, give chiropractic a try! Contact us today to set up an appointment.